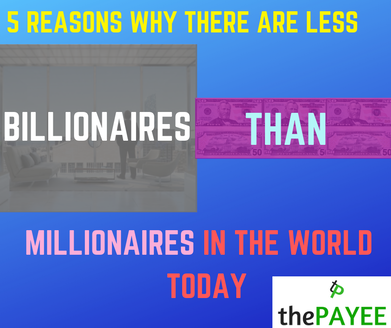 Updated 02 May 2021
Introduction
Many people in society live paycheck to paycheck, which has been an issue in society for many years. Some people find it hard to come out of that lifestyle, but some have figured out how they can break out of that standard of living.
Some millionaires work so hard to achieve wealth. At the same time, some just inherited it; some say that the system is against them, so they cannot reach that status. Still, the truth is that anyone can become a millionaire if they want to. Nowadays, people can quickly become a millionaire if they focus on their passion and are willing to learn.
Many try to attain millionaire status by starting a business. But when they get in and find out that business is brutal, they usually give up and go back to their 9 - 5 jobs. Still, those who are ready to sacrifice and chase their passion are the ones who typically get to that status.
Many people are scared of failure, which has hindered them from pursuing their dreams or what they want to do. Some try to achieve that status by going to school to study in a field that can make them more money when they come out and get employed; this has made some people millions, especially doctors, lawyers, etc. But most at times, they have a lot of student loans to pay, which can hinder them from achieving that status for many years.
​1. Millionaires Retire Too Early
Most people dream of retiring at a very young age to travel the world and have a lot of fun. Some of them work very hard to make millions of dollars. They feel fulfilled; there is nothing wrong with retiring early, but this is one reason why there are fewer billionaires.
Millionaires feel they have a lot of money that can last a lifetime. And when they retire, they can still maintain their lifestyle; this is true they can live a good life, but this hinders them from pushing to reach billionaire status.
​2. I Have A lot Of Money Mindset
Once most millionaires reach that status, they feel they have it all. That can be limiting because the way they see things could be different from how a billionaire sees things.
A millionaire could feel they have a lot of money, but a billionaire who wants to make more billions, a million dollars is nothing. And if a millionaire can understand that, that should make the person push for more.
​3. Millionaires Wants To Protect What They Have
Instead of trying new ventures, millionaires often would want to protect what they have. They forget that before they became millionaires, they were taking risks by using money. But now, they want to protect their investments since enough is coming in. They see no reason to keep pushing forward, which can hinder them from achieving the billionaire status.
​4. Millionaires Spending Habit On less Productive Things
Just as thousands of people become millionaires each year, thousands lose that status and go bankrupt because of bad financial decisions. Most of them acquire what they can’t afford.
Most millionaires owe a lot of money; this is sad. You can see them driving expensive cars and living in expensive houses that they cannot pay for; this has made many millionaires poor. But most of them know how to jump back on their feet. They can do this because of their mindset. They have spent a lot of money to improve their skills and knowledge of how money works; this is why you see a broke millionaire today, and tomorrow is back on track.
​5. Lack Of Mentors
Mentors are usually people you admire. Most millionaires at one point had someone they admired; they can inspire and tell you it’s possible to become whatever you want in life. Nevertheless, when some millionaires achieve what they dream of, they often will stop looking for mentors who can help develop their knowledge. They feel that they are mentors themselves. But nobody knows it all; you have to keep learning to keep pushing for more incredible things.
Recommended Articles